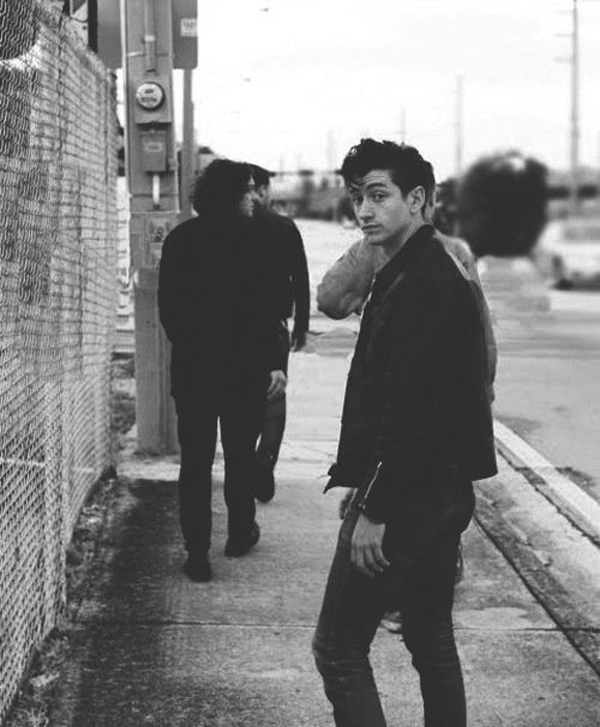 I am a woman of many obsessions. When I was about eight, my room was plastered top to bottom with images of the Backstreet Boys. This included orange bedsheets with an extremely ugly cutout image of the band and matching alarm clock. By the time I was ten, the Backstreet Boys had to share the limelight with Leonardo DiCaprio. His boyish charm later resulted in a library full of photographs from the internet on our purple iMac. And also as an early teen, I didn’t just religiously watch Friends, I painted my walls lavender,  like Monica’s living room.

I guess that we all have fond memories of teenage fandom, but the thing is that with me, it never really stopped. The object of my obsession and the way I deal with it may have slightly changed over the years (DiCaprio and Friends are still in my life) but I sometimes doubt if the intensity of it all did.

Rewind to september, when the Arctic Monkeys played a show for only 69 couples in my hometown Antwerp. I was lucky enough to get my hands on a ticket for this intimate event. The universe threw me a bone, and seeing as I knew the lyrics of “Do I Wanna Know?” by heart after just two days, I thought it was only fair. Working from home, I was able to play that “tune I found that makes me think of you somehow” on repeat.

So on that day, around five in the afternoon, I got massive stomach aches. I was so nervous that something would go “wrong” and I’d somehow miss the whole thing. I’d been listening to the band all day and could feel the concert fast approaching and my heartbeat rising every time my evening plans popped into my head (this has happened before). My body may be in its mid twenties, but in many ways I am clearly still 12. No dinner and several pills later, I stood in the rain shivering, waiting to get into Cafe Corsari, the TV show that hosted the event. Once inside, I doubt that I actually heard anything that was said before I saw the band, and when the concert finally started, the whole world sort of faded away for 14 songs.

A week ago, those same monkeys played in Brussels. Slightly bigger venue and less nerves, but once again, the world around me ceased to exist for that short period of time. And that’s probably the whole point of these obsessions, isn’t it? It’s pure escapism. I consider myself to have a happy life, but whenever I’m swooning over Alex Turner’s incredible lyrics and cute accent, I’m definitely not wondering how I’m ever going to pay for that new apartment. Whenever I see or hear something related to the band, my heart makes a tiny jump. And whenever I hear Fake Tales of San Francisco, well I still just HAVE to turn the music up and dance.

It’s pure bliss just melting away whenever you hear that voice, and for that reason, I don’t want to be 26 when it comes to fandom. I want to be 12 forever.